In October 2011 myself and several other friends went on a motorbike ride through the western half and northern parts of Laos, after a very eventful couple of weeks travelling over rocks, mud, dust & rain we arrived at the northern most part of Laos on the border with China, we came over a small hill and in the middle of nowhere was this small city (Golden Boten City) with no-one in it, as it turns out there had been a city of casinos, flashing lights, gaming, lady-boys & all of the night life, all shut down overnight and vacated, and no one there but the military guarding it, it was a sight of contrasts, to see such a modern city of buildings some brand new, three up to nine, ten stories high and no-one in them.

I attempted to enter one of the casinos so that I could see the inside and hopefully photograph it, however as I went to enter two guards stopped me from entering, so no inside photos sorry.

Apparently many gamblers would go missing due to bad debts, bodies were reported to be found in the Mekong river, the place had turned into a crime capital, the Chinese Government cut off the supply of power to the city, in an effort to close the place down, eventually forcing the Laos Government to act on shutting it down, about two months before we got there!!

I searched the internet post my return and found this article on the Forbes Asia Magazine website, you may be interested in reading of the cities history. I have copied the artical and placed it below, just in case the link is not working. Additional Information Ref: http://www.forbes.com/global/2011/0808/companies-laos-china-economy-gambling-gangsters-bungle-jungle.html

Bungle In The Jungle

The idea was a Chinese economic colony in the Lao wilderness, and that was okay with Laos. Then the gamblers, hookers and gangsters took over, and that was not okay with China. 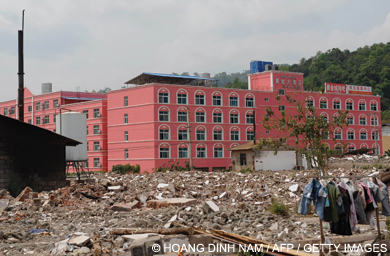 The pink buildings were meant to serve as hotels and office space in Boten. Shops and housing in front were razed to make way for a new marketplace.

Across Asia, once-backward regions have surged in the boom that’s lifted millions out of poverty–monuments to the Asian economic miracle. But there have been grand schemes that went spectacularly wrong. Few compare with Golden Boten City, a project that promised a beehive of economic activity in northern Laos by the Chinese border, but today sits lonely and desolate.

Route 3 in the Lao highlands cuts through rubber plantations and forests, a vast carpet of greenery interrupted only by tiny villages–groups of shacks on stilts and tribal people in bright blue, red and black garments. Then suddenly there’s a clearing–and the surreal sight of a dozen enormous buildings erupting from the plateau in blistering shades of pink, orange and yellow.

This is Golden Boten City, a “Paradise for Freedom and Development,” as the investment brochures called it. In 2003 a developer leased the 21-squarekilometer site from Laos for 99 years, and buildings started going up the next year. The plan called for a trade zone in what was expected to be a key growth corridor, with road and rail links from southern China to ports as far away as Bangkok and Singapore. Drawings depict a golf course, a resort and apartment blocks along picturesque lakes and lagoons. Instead, Boten quickly became a Gold Rush-style boomtown and, like many such towns, renowned for gambling, crime and bustling brothels.

At Boten’s peak thousands of people each day poured across the border from China’s Yunnan Province, thanks to unprecedented visa-free access. As gaming halls proliferated, rows of shops sprouted–a ramshackle market serving Sin City. A dozen lingerie shops catered to battalions of Chinese prostitutes, with the finest choice of stiletto heels in Laos. Pharmacies stocked sex potions alongside racks of X-rated DVDs and containers of bile from black bears fresh from a hilltop factory and used in traditional Chinese medicine. Next door to the factory was a massive pink entertainment hall that boasted transvestite shows. The ladyboys hailed from Thailand but everything else came from China: the beer, the police and practically all the dealers, even the currency that made it all possible. Hotel signs were in Chinese, and Boten’s clocks didn’t run at Laos’ sleepy pace, but were set an hour ahead to China time. Boten was completely a Chinese colony.

Then, just as fast as gamblers from China turned this remote site into the Macau of the jungle, Golden Boten City melted down. Stories in the Chinese media talked about hostages held over gambling debts. Residents told FORBES ASIA of bodies dumped in the river. China cut off electricity and telecom service to the enclave and started requiring visas. “We heard reports of killings, of people disappearing,” an official of Golden Boten City Ltd., the developer, told FORBES ASIA during a visit in May. (The developer said it didn’t run the casinos; that was done by several little-known operators from abroad.) “We don’t disagree that there have been problems here, but we are working to correct them.”

Days later the last casinos shut down. The shops closed for a lack of customers, leaving behind a huge supply of stiletto heels along with a giant picture of American actor George Clooney gazing forlornly from an unopened luxury goods emporium, one of a half-dozen grandiose structures that had been completed but now stand unused. The bears were still packed in cages, milked of bile, but the ladyboys returned to Thailand, and Boten was left a ghost town.

The man behind Golden Boten City is Huang Minxuan, 56, who had been involved in a casino in Myanmar before it was shut down in a crackdown by Beijing on just-over-the-border gambling. (Gambling is banned in China outside of Macau.) Originally from Fujian Province, he operated a business in Yunnan for some years before registering a slew of companies in Hong Kong in 1997 and 1998–all long dissolved–and gaining Hong Kong citizenship; he’s still the honorary chairman of the Fujian Chamber of Commerce in Yunnan.

Huang says between $200 million and $300 million was spent on Boten, but he doesn’t say where it came from or how much of it was his money. Chinese media reports indicate that he served as the executive director of a Hong Kong company that pumped $36 million into the project when it began, but no record of the company can be found. The second-in-command, George Huang, 55, a Taiwanese national who worked with Huang Minxuan at the Myanmar casino, has said small investments came from Thailand, Singapore, the U.K., Russia and Ukraine. George could not be contacted; he is believed to have left for a job in Thailand after Boten collapsed.

Casinos began sprouting in Myanmar along the Chinese border in the 1990s, and eventually up to a hundred were operating. Most were modest in scale, sometimes featuring a hotel, but all followed the same formula: deploy fleets of boats to ferry gamblers along the Mekong River, mainly from China but also Thailand. But in Boten, the Huangs had grander designs. Laos had been eyeing the Myanmar tourist traffic and started touting its special economic zones to investors. “I was talked into the idea,” says Huang Minxuan.

I planned yet another bike trip travelling around the northern parts of Laos, the trip would last about two weeks and cover from Vientiane upto the Chinese border and back down to Luang Prabang, during the trip I had planned for our group to spend two nights & one day in a tree house in the middle of the jungle forest with the Gibbons.  As part of the trip we had to take a ride in a four wheel drive for about 1.5hrs, to a small town, then cross a flooded river and proceed by four wheel drive another hour up into the mountains, bumping and bogging our way to what they called base camp.

At base camp the end of the road, we were required to carry our gear and walk the rest of the way, which was about an hour & half walk to get to the main camp, so off we went.  In my backpack I had several lenses and cameras, and few cloths, probably 15kgs, no worries off we went, up & up & up, stinking hot & humid with no breeze, because of the jungle & foret, by the time I got to the main camp, I can honestly say I was very tired and glad to be there, I was just glad that there was not another hill to climb, I was ready to lay down, however unbeknown to me, this was only the main camp no where near where we were staying, surprise, I’ll say.

After a short rest we then had to put some “zipline” gear on, as there were a number of ziplines, “flying foxes” that we were going to go to get to our treehouse, this was another hour and a half further up, so off we went, up hill down dale, I just could not understand why we would struggle up that hill only to have to struggle down it again, this went on & on forever it seemed, with the ocassional releif of a zipline ride, where you would latch onto a steel rope and traverse across the valleys, sometimes 300 meters, and about 100 meters above the ground, but the cool wind while you were zipping accross was a great releif, then you would unclip and start climbing up the next hill, this went on for an hour & a half, and I remember when climbing one of the last climbs, I was seriously considering LEAVING MY GEAR THERE, I was prepared to loose it, I will buy it again I thought, I had had enough, I couldn’t climb another step, I was exausted.

Well a bit of a rest, and some very slow steps, got me through, just as well because I can honestly say this was the first time I had ever considered dumping my gear, I am glad I didn’t though.